CAPE TOWN, SOUTH AFRICA (November 21, 2011) – The PUMA Ocean Racing powered by BERG team has suffered a broken mast on the first leg of the Volvo Ocean Race 2011-12, which began 17 days ago from Alicante, Spain. The crew are unhurt, according to a press release issued Monday.

«The rig onboard PUMA’s Mar Mostro failed at around 15:00 UTC in the southern Atlantic Ocean, about 2,150 nautical miles from Cape Town, South Africa.

Skipper Ken read reported: “We were sailing on a port tack, beam reaching in 22-23 knots of breeze, heading east northeast with eight to 10 foot waves when the mast failed. There were no warning signs.

“There was no panic onboard, and all crew are safe and well.

“Thanks to amazing seamanship, the three pieces of the mast and all of the sails were recovered. We haven’t suspended racing at this point and are weighing are options.

“At this point we are not using our engine, but are taking some time to clear our heads and evaluate next steps. Our plans may include heading to the island of Tristan da Cunha – about 700 nautical miles from us, nearly on the way to Cape Town.

“This is the saddest and most disappointed 11 people on earth. We were in a comfortable second position, traveling south to get into the final front and head across the southern Atlantic towards Cape Town.

“We were planning to be there in five days. At this stage, my goal is to make sure we get this crew back safely and we will look at options as to how to get back in this race.”

The Brazilian search and rescue organization have been informed and are on standby to assist if necessary.

PUMA Ocean Racing’s shore team is working on a recovery plan to ensure the yacht can rejoin the race as soon as practically possible and will work closely with Volvo Ocean Race to determine the cause of the dismasting.

Volvo Ocean Race control is in constant contact with the team to establish the full extent of the damage and ensure the crew are given full support to enable them to deal with the situation.

The causes of the dismasting are not known at this stage. However, the rig is of a different origin and manufacture to that of Abu Dhabi Ocean Racing’s Azzam which suffered a failure earlier during Leg 1. (…)» 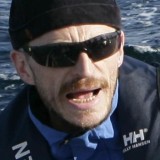